CHS Musicians move on to top universities and music colleges 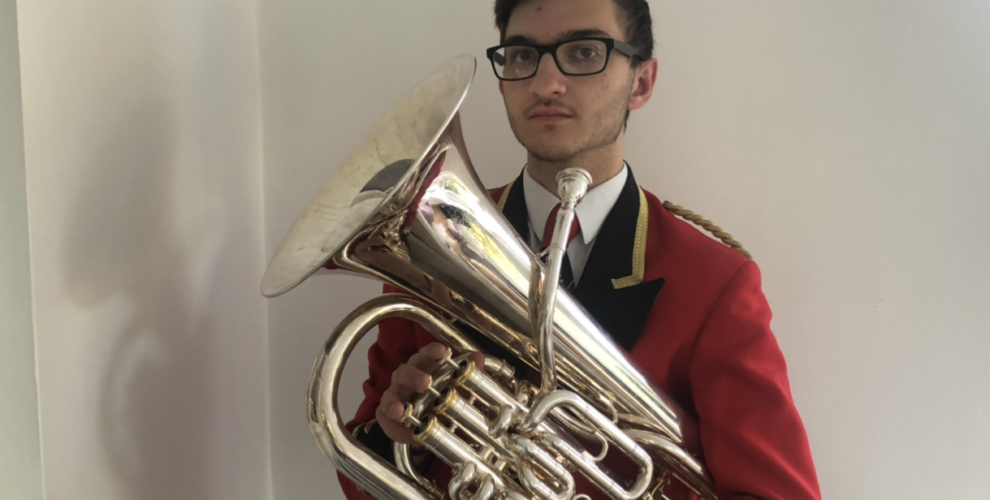 Crompton House has a fantastic Music Department, with large numbers of students from all year groups involved in our choirs, bands and other ensembles. Each year we have Sixth Form students that progress from A Level Music on to study Music at a higher level – whether this is at university or at specialist music colleges (conservatoires). 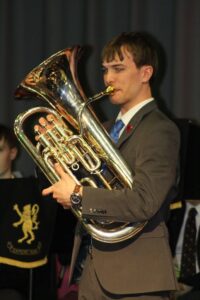 James performing at the Crompton House Spring Concert in 2019.

In September 2020, four of our ex-students start at universities and conservatoires around the country – we asked them what advice they had for future musicians. Adam is going to the Royal Birmingham Conservatoire to continue his studies of Bass Trombone, both James and Julian are moving on to conservatoires to study Euphonium (at the Royal Welsh College of Music and Drama, and at the Royal Northern College of Music respectively), and Delphine is reading Music at the University of Birmingham.

What made you decide you wanted to study music after sixth form?

Adam: Music is my passion, it is where I feel at home and I can’t see life without it.

James: The most honest answer is that it is what I’m best at. My Music A level helped develop my passion for music and made me want my hobby to be my career.

Julian: I have played music from the age of 6 years old after joining my local youth band. I originally started on cornet before moving onto flugel horn a couple years later and finally ending up on euphonium when I was 15. Due to performing at such a young age, I really enjoyed being on stage and doing my thing, and decided after a short time in the National Youth Brass Band that music was the career choice for me. I would eventually like to end up in teaching myself after I finish my degree.

How did you choose between going to university or going to a conservatoire?

Julian: I chose a conservatoire because I really enjoy the thrill of performing and feel that I best show off my musical abilities in performance rather than the theory and historical sides of music.

Adam: I chose conservatoire because it meant I could really focus on the performance aspect of music in the best way possible.

James: Like Adam, I plan to be a professional performer in future. I chose RWCMD as it has a very specialised euphonium department which will really help my progress as a musician, especially getting taught by my idols David Childs and Sir Bob Childs.

How did you pick your uni/conservatoire?

James: I looked for conservatoires which had the best reputations for euphonium teaching and then spoke to friends and teachers who have gone down a similar pathway as me.

Julian: I picked RNCM as, in my opinion, it’s the best conservatoire for my chosen instrument. Euphonium is a brass instrument and a lot of the best brass bands in the world are in the north of England meaning the work aimed at my specific instrument is fantastic round here. I also think that RNCM has some of the best tutors around and I also love the city of Manchester.

Adam: I chose Birmingham the 1st time I went on a music centre performance trip. It was away from home, not too far but not too close, the head of my department was nice and I felt comfortable.

What did you have to do to get in to your chosen course? Were there auditions/interviews?

Adam: I had my performance audition during the autumn of 2019 and was offered a place practically there and then!

Julian: To get into my university I only actually had to get 2 Es in my A Levels, however I had the pressure of having to apply for my conservatoires extremely early on in the year. I had my first auditions in early November, before some people had even submitted their UCAS application, and found out if I had met the requirements for the conservatoire. I applied to Cardiff, Birmingham and RNCM and thankfully ended up getting in at all 3! In the auditions I had to play a Grade 8 standard piece and also a study, followed by a few scales, some sight reading and finally an interview to discuss my plans for the future and why I would like to study at the institutions.

James: Because of Covid, I had to send recording of two pieces. I found this much more stressful than doing a live audition because I wanted to get everything perfect in the recording and the conditions weren’t ideal. 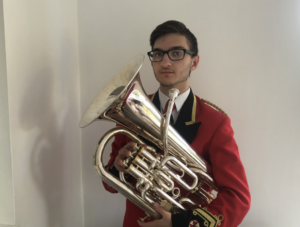 Julian in his Dobcross Band uniform

Do you know what you want to do after uni/conservatoire? How will your course help?

Julian: After university, I’m not fully sure on what career path to take as I really enjoy performing and may consider taking that up for a while. I know for definite that I would like to end up in teaching and therefore will do an extra year on my course to complete a PGCE if all goes to plan.

James: Ultimately I would like the experience of learning at a conservatoire to help me get into the RAF as a musician, but I will also look at soloistic work and teaching.

Adam: Afterwards I wish to carry on performing in as many ways that I can do. Studying at conservatoire will give me lots of performance opportunities and different connections that will help me to do this.

What advice do you have for future applicants?

Adam: This may not be a surprise, but for future applicants I would say practice, practice, practice. Get well prepared and don’t leave your scales to the side because many do which means if you know them, it looks good! Plus, the staff at your auditions are behind you the whole way so relax: they want to see potential not just perfection. Work hard on your performance during the summer before because that’s what it is based on, not your exam results. And get involved in a variety of styles if you can, it really helps to increase your technique and style understanding.

James: Do your research and ask for advice from people who know what they are talking about. But in the end, you need to choose where you feel you will be happiest and the place you feel is best for you.

Julian: The only advice I have is to be prepared, not just in conservatoires but for university applications in general – it comes round a lot quicker than you think! I also advise you to actually listen to your teachers because although they may drive you mad when it comes to A Level, they most certainly have your best interests at heart and will try and help you in any way they possibly can.