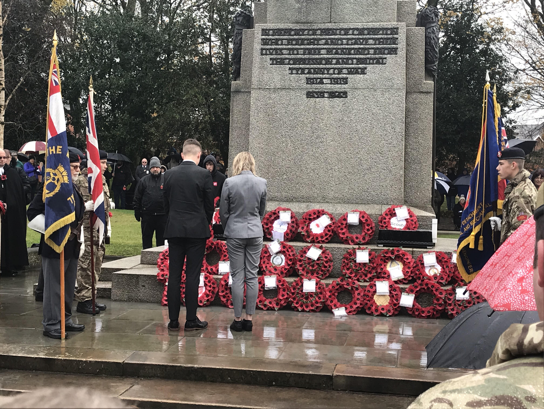 To mark the 100th anniversary of the end of the First World War, sixth form students, Joseph Cooke, Philippa Bateman, Josh Clarke and Aurooj Iltaf represented the school at the memorial service in Shaw.

At 10:30am, myself and three other Sixth Form Students gathered at the war memorial in Shaw Town Centre ready for the service ahead. Stood next to the memorial with the Priests, Vicars and other readers and speakers we could see the full mass of people that had turned out to pay their respects on such a cold and wet day.

The service started with a gathering and call to remembrance from Fr Graham Lindley after which the last post sounded, the silence which followed was absolute and was moving, then came the Reveille, at which point myself, Pippa, Josh and Aurooj stepped up onto the four corners of the monument. After the reveille, along with four volunteers from the local church we simultaneously read out all 421 names of the men who lost their lives from Shaw, although not everyone would be able to hear, the simple fact that each name would be heard by at least one person meant that every man was remembered.

After the oration and The Kohima Epitaph, the hymn Abide With Me was sung aloud by everyone in attendance, after this came the readings then the second hymn of the service, O’ Valiant Hearts, during which myself and Pippa laid a wreath on behalf of the school.

Waiting in line to lay the wreath gave us time to reflect on the suffering and the sacrifice of all who have died in conflict, as we laid the wreath it reminded us of just how much our society cares even after 100 years, just how important it is that we never forget the events that have happened to give us all the life we live.