Every year, our school’s Chapel Choir, conducted by Mrs Nixon, goes to a cathedral to sing Evensong. This year, the venue was our ‘home’ – Manchester Cathedral, which is a wonderful place to sing with fantastic acoustics. With Adam giving a reading and Chris singing the Preces for the choir to sing the Responses, as well as Kacey, Delphine, Nathaniel, Ethan and Thomas joining Adam and Chris in the choir, the Sixth Form was well represented. 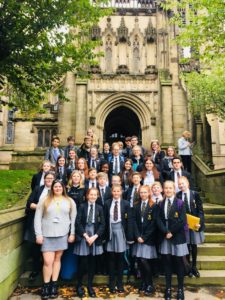 Our Evensong was followed by a full choral weekend with over 100 students from other Woodard Schools. Having arrived in Worksop on Friday night, we woke up early Saturday morning and made ourselves some coffee, went for a walk and had a lovely time playing games with singers from the other schools before the day began.

We spent the majority of the day in rehearsals in the Chapel at Worksop College, learning vast amounts of music for the three services we took part in. As a break, we held an informal concert where lots of the Crompton House students took part, showing different aspects of our musical personalities to the rest of the group, as well as guests from the College.

After tea in the Great Hall, we were taught some Gaelic dancing – we were taught by a wonderful teacher and accompanied by a great band who played some refreshingly different music to what we had been doing all day.

On the Saturday night we took part in an ancient monastic service called ‘Compline’ of which we sang then didn’t speak until we woke in the morning. This gave me a nice sense of space and calm within such a busy time, giving me time to reflect on a spiritual level as well as a physical and mental level.

We had a few hours of rehearsal before we performed the Eucharist at around midday to a much larger audience than the Compline the previous night. It sounded delightful and I’m sure the audience appreciated the service, despite many of us losing our voices a little from everything the previous day.

After a quick lunch, we headed back to rehearsals for Evensong, which we had already performed on Friday so the Crompton House choir was quite good at this part of the service. We performed this from 4pm until 4.45pm, before embarking on the long coach journey home.

This was a very enjoyable experience singing with so many other people in such a wonderful environment of the boarding school’s chapel.

A new bus pass that gives teenagers the freedom to travel..