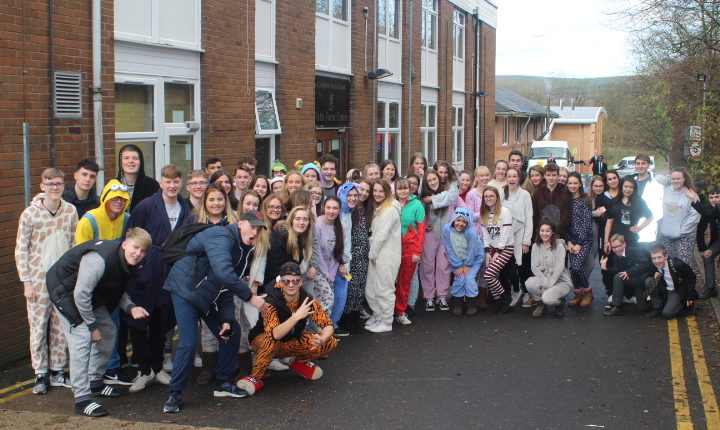 Pyjama Day to raise funds for – The Liver Unit at St. James Hospital!

On Friday 24th November, sixth form students came into college in their pyjamas in order to raise money for The Liver Unit at St. James Hospital. This charity was brought to our attention by a year 12 student, Emily, who felt it was important for her to that we raise money for this particular charity as it is so close to her heart.

Every pupil involved themselves and showed full spirit. Crompton House had sixth form students with animal onesies, Disney onesies, dressing gowns, Christmas pants and bed slippers! It was funny to see everyone replacing the smart suits for funky pyjamas and it was nice to see that we all felt comfortable being around each other dressed like this.

During dinner time there was a concert, which we had in our sixth form centre, where Dominie, Lois, Will and John performed for us by singing and rapping. There were many smiles and laughs throughout and it enabled people to donate more money towards the cause.
We also had a face glitter station, which was run by Jade and Niamh. Jade kindly donated her own glitter in order for us to raise more money for the charity. The glitter was very popular with the students as it raised £43.70.

Everyone really enjoyed pyjama day and didn’t fail to make a contribution. The whole day was a huge success as it raised a total of £263.42 including the pyjamas, face glitter and the concert! The whole sixth form has had a fantastic time fundraising and we really hope that this money will help The Liver Unit at St. James Hospital and make a difference.